Can a burger chain make awesome chicken sandwiches? Two sandwiches worth crossing the road for.

The story of Jack in the Box goes back many years to San Diego, California. I'm not going into their history, as that is not the focus of this article. However, like most things, some of Jack's history will be needed to clarify the present. We will offer some links for further reading at the bottom of this article.

The Golden State. California is known as this for many reasons. There's the gold rush of 1849, there are aspects of business that make the moniker apropos. Disneyland. Hollywood. Defense industries, and on and on.
So far as food, McDonald's, Del Taco, In-N-Out Burger, Wienerschnitzel, Taco Bell, See's Candies, Denny's, IHOP, Baker's, Carl's Jr, and many more! It should come as no surprise that Jack in the Box is California Born as well. The benchmark for chain fast food burgers is Mc Donald's, of course. The benchmark for delicious burgers is In-N-Out, like it or not.

Jack in the Box has a huge advantage in that their name does not identity a particular product. To to get to the that point name recognition is strong enough that a compony no longer needs to identify with a particular product or genre is a boon. In-N-Out Burgers? Burgers. Chick-Fil-A? Chicken.

However, burgers is what Mr. Box is now for. That's what brought them notice, particularly the Jumbo Jack. Remember Rodney Allen Rippy? He's still around, yet a lot older now. He was the little boy trying to eat a Jumbo Jack in their commercials. The Jumbo Jack put Jack on the Map, if you will.

Evolve or die. Generally speaking, when your competition is tough, you must take measures to get people in the door. That is the dilemma facing many fast food purveyors.

Jack in the Box really began to break out of the burger joint mold with the advent of the Chicken Fajita Pita sandwiches beginning in 2007. Then there were the bowls, and lately the tiny tacos.

I have done live action reviews on a few of Jack in the Box items. As far as their chicken sandwiches, well, since you asked...

I have to say for the sake of clarity, I was might skeptical of Jack's chicken sandwiches. I mean, hey, the jumbo jack burger is only meh. Seriously. It is far overshadowed by the Buttery Jack, and the Bacon  and Swiss Buttery Jack. I mean seriously outclassed! If their flagship burger, which has been around for ages, and outgunned by everyone else's flagship burger, how good could the newbie chicken sandwich offerings actually be? No? Which would eat if yo could choose one, a whopper of a Jumbo Jack. Big Mac or a Jumbo Jack? Jack loses most every time. So, what's up....

I tried the Spicy Cluck Deluxe a couple months ago. I recently went into a Jack in the Box, and my intention was to get one. Sadly they only had the regular cluck - pictured below. You'll also note that it is VERY different than the Spicy Deluxe! 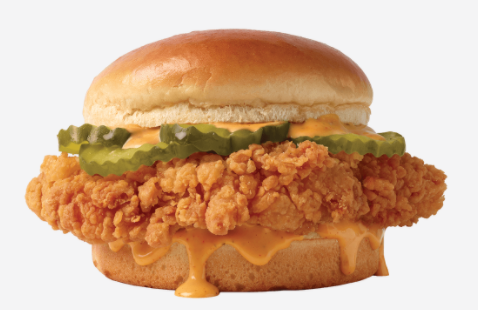 I think just one look at this thing, you know whom they are emulating. Imitation is the most sincere form of flattery.

You will note, beyond doubt that this thing was absolutely delicious! If they had a fraternity, I would have to join that...

The next one I tried was the Homestyle Ranch Chicken Club. I was a little bothered that I could not get a Spicy Cluck, but isn't that always how it goes? Find something you really like and you run the risk of them taking it away. Or so it seems.

At any rate, this chicken sandwich was also VERY tasty! Now, would I rather have had another spicy cluck deluxe? Yup.

All in all, I have to say, Jack in the Box is so good at chicken sandwiches that they should consider a name change to Jack in the Bocks. Just saying.

Growing up in the California

Growing up in the 1960's in the Southland, as we natives call it, there was not a lot of options so far as fast food. When McDonald's eventually came to town, (yay!) this was heaven for a child! In-N-Out was nowhere nearby until about 1980, and that one was walk in only, no drive through. Taco Bell still sported the adobe look and arches, outside dining only. Naugles still existed. Del Taco, none nearby. Burger King and Jack in the Box, your folks had to drive you to one, and we're talking like an hour away.

In those times, if something was not nearby, it was not worth the trip. So, when it came to burgers, it was McDonalds, or homemade. Simple as that. Add to the fact that parents on a budget (i.e. smart) usually will default to home cooking.

Good is good, and fast is good, and so on. While my folks made some really great food, I still, to this day, sort of wish we could have enjoyed more fast food. However, on that note, if you misspell fast food you get fats food. And we all know that home cooking tends to be a healthier.

Still, I would have loved a Jumbo Jack more often that once every couple years. Now, with about 5 Jack in the Box stores nearby, I can.

For in depth info on Jack in the box, visit these sites:
JackintheBoxinc.com/company/about-us
Mashed.com
Zippia.com
Wikipedia.org