3D Doritos - what are they thinking?

First of all, apologies for taking so long to write any articles. Ol' Bucky has been busy with the day job and making review videos daily on TikTok, Instagram and Youtube. I tried the 3D Doritos recently, and well, here's an article!

So, what is going on with Frito Lays and their Doritos? Particularly the 3d Doritos? Well, unless you have been hiding under a log for a while, you'll have noticed that Frito Lays has been getting really inventive of late. What with their Flamin' Hot coating going onto virtually everything, and weird flavors like pickle chips, and Tapatio Doritos. You have to give Pepsico kudos! The parent company of Fritos Lay is definitely thinking outside the box. But, is it a good thing, all in all?

First of all it's fairly common now

Look around you. You'll see all sorts of new products hitting the market these days. And Pepsico, like it's child Frito Lay is no exception. For ages major companies were reticent about introducing new items. Sure, they popped labels touting "New and Improved," but fully new products? Sure, there have ben many, and test markets largely determined the future footprints of these products. Further, when new products hit the shelves, they were one-si two-si deals. Understandable, as development costs, test marketing, advertising, shelf space all costs money. And what about flops? No one wants to lose their job because they guessed the market wrong with all these expenses paid or looming. So, what to do?

Let's Do Doritos This way...

If you're older, like me, you'll remember plain old delicious Dorito tortilla chips. These hit the market initially in 1966. 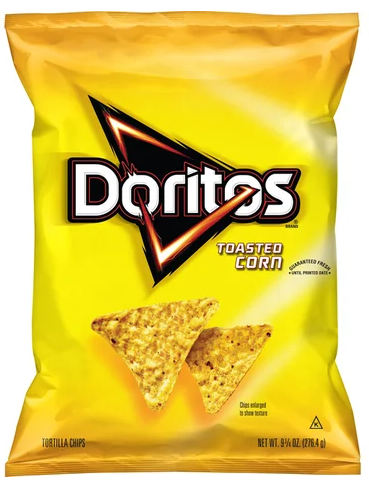 They still sell them, but these were the first. Sure, the packaging has changed over the years, and I'm sure the ingredients as well. Yet, they still exist. You used them in dips, salsa, bean dip, etc. Or, like me, you ate them as they were. These bad boys started it all, do far as the Doritos Brand. Further, though they were flat, they were 3d Doritos. Everything you eat, folks, is three dimensional. These have height, depth, and width.

Then things got really good!

The next flavor of Doritos came out in 1967, the exceedingly delicious, discontinued, then reinstated Taco flavored Doritos. These were, in my opinion, the best of the best. See this article for more!

After that, we saw Nacho cheese Doritos, this in 1972. The rest is history, with new flavors being introduced in the United States, and the world, every few years. You have to admit, they have produced, year after year, success after, mostly, success. Yes, there have been clunkers, but not very many!

I have tried these a few times, and I have the proof here in video form. In the video, below, I tried the Spicy Ranch 3D Doritos.

Transcript: Hello everyone, Bucky here got a treat for you tonight, Doritos 3d Crunchy Spicy Ranch Flavor. They're weird chips, are kind of puffy. All right let's see what we got. Oh yeah, I remember, they're like bugles, that's right. They're not Bugles, but they look like Bugles. They are more tender than bugles all right. They're not bad but I've got to ask you, frito-lay, they're like Doritos, I mean I'm totally happy with them not being 3d, it's mostly a marketing gimmick because it's kind of like a Dorito. You could just put this flavoring on regular Doritos and market it, and not have this ink and all those other things. I mean, they're good don't have any purpose.

So, these Doritos are a wild card. I could not put my finger in the issue. I liked them okay, but seriously, I LOVE Doritos. These 3D ones, however, left me cold. Maybe it was the weird ridges. Maybe it was the fact that they looked like closed off Bugles. Or, perhaps it was the change in flavor. The corn just does not taste the same. As much as these threw me off, I could not, and still cannot, understand the point, aside from novelty. Why have an air pocket inside? Why not fill it with something? On my next test, the Chili Cheese Nachos, I think I figured it out. It was a combination of the above, but mostly the size of the chips!

Hey guys today trying Doritos 3d crunch. This is chili cheese nacho. Now you may recall i did try some of the 3d Doritos here not long ago, a couple months ago and yeah, i think those ones might have been the spicy ranch. Opening the package on up, yup they are just like bugle looking things like the other ones were. interestingly they almost look like they're 3d printed. I'm going on in. They remind me of bugles with chili cheese nacho flavor on them, but i think i figured out what it is I dis like about these. They're 3d Doritos, but they're teeny tiny. Now if these were 3d and like the same size as regular Doritos, I think I'd like that a whole lot better. But as always try yourself see what you think.

So, as I said in that video, it was as much about the size, to area, to flavor ration as anything else.

Watching these videos again, I'm very much struck by the ribbing of the product. In short, it provides, or add/subtracts something from the overall flavor of the chips themselves. When I eat a Dorito, I'm searching for the familiar texture, along with the tasty. These have a sort of granular texture that I find unpleasant. Sort of like fried Cheetos, which I have recently come to seriously dislike.

I'm also told that Frito Lays is discontinuing the Tapatio Doritos, one of the best Dorito off-shoots I have tried of late. Maybe I'll write an article on those too. For now, however, I'll just stick to 2 dimensional 3D Doritos.