Even though summer is months away, epic heat has seemingly settled in over Coca-Cola. With the “leak” to the media regarding Coke’s “Try to be less white” employee training program, and the predictable uproar that one might expect when a large corporation exhibits bad table manners. However, let’s dive in and analyze this a bit, shall we?

I have not written an article here in some time. My apologies for that, work has been super busy. However, I am on vacation this week so I have the time for some scribbling. More importantly, had I been at the ol’ grindstone the last few days, I would not have had the time to even pass the “be less white” thing though my brain, save for a typical, superficial, knee-jerk reaction.

First Impression on Be Less White

I’m an old white guy who leans conservative on many things. I also have some distant Cherokee ancestors, some of whom had been slaves in the 18th and 19th century. So, naturally, my first thoughts were along the lines of, “What the heck are you doing, Coca-Cola? Racism is racism, no matter whom you’re singling out, individually, or as a group.”
I didn’t react immediately. In fact, this article is pretty much the only thing I have had to say about the Coke Debacle of 2021. Yet, having given some thought to the topic at hand, I decided it’s time to add my voice.

Any and all racism is still racism

It seems to me that a good many people think that racism is only racism if it is white people committing it. Be it slurs, discrimination, you name it, if it is a “person of color” it’s all good, no worries. That, my friends, is a falsehood.

I Have A Dream

Dr. Martin Luther King Jr had many famous speeches, but none more so than the “I Have a Dream” speech. One small part of the whole, which has stuck with me my whole life, is…

“I have a dream that my four little children will one day live in a nation where they will not be judged by the color of their skin but by the content of their character. I have a dream today.”

You can read the entire speech here: I Have A Dream.
Video of the speech

Well, golly, judged by the content of their character, not the color of their skin. How about that. I agree 100% with Dr. King, and always have.

On the other hand, in 1964, when Martin Luther King Jr. won the Nobel Peace Prize, civic leaders in Atlanta, (Coke’s home and birthplace) refused to support an integrated dinner honoring him. Coca-Cola went to these folks in support of the dinner and said [paraphrasing] “CocaCola does not need Atlanta, so you best ask yourself, does Atlanta need CocaCola?”
The civic leaders caved and the dinner sold out in minutes.

Now, in the present, Coca-Cola’s Be Less White seminar does…

Assail both skin color and character

I don’t know if you’ve had the chance to read up on Coke’s Be Less White program, and it may be harder to get hold of in the near future, as it has been aced out of the LinkedIn website where it was hosted. You see, it assaults people who happen to be white, both their skin color, AND their character. This created such an uproar that the seminar was removed from LinkedIn. 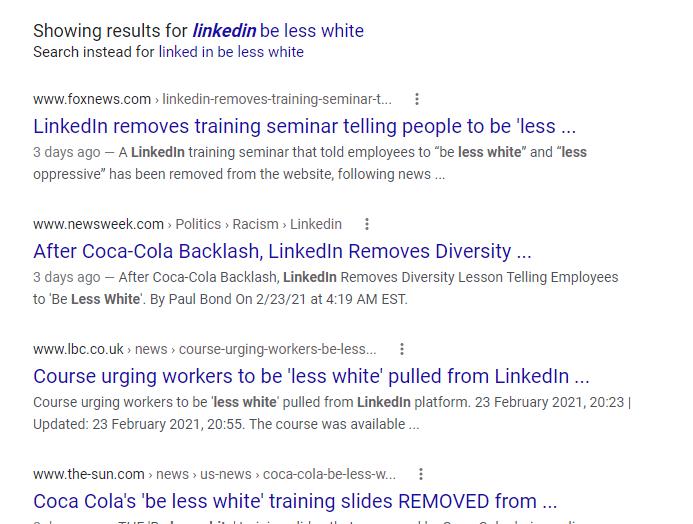 Whether LinkedIn removed it, or Coca Cola removed it is irrelevant. It was racism at its heart, likely an embarrassment to both entities, and by removing it, an admission of the inherent racism itself, I believe.

“What was in there?”

Ok, so far so good, but by adding the word “white” aren’t they basically saying, “Hey, we are a racist company”? They go on.

To be less white is to:
-be less oppressive [no oppression in this, Coke, of course, noooo]
-be less arrogant [pretty arrogant thing to say, imho]
-be less certain [huh? Come again?]
-be less defensive [about??? So, what, be offensive??]
-be less ignorant [calling white people ignorant now, are we Coke?]
-be more humble [so white people are not humble. Hmmm.]
-listen [tooooo?????]
-believe [believe….what?????]
-break with apathy [so be an uncertain, humble, inoffensive, activist, not oppressing others, whilst listening and believing in undefined things? Is that right?]
-break with white solidarity [Is this a thing? Pretty sure it’s not a thing. If it is then I suppose I’m woefully uninformed.]

I have to ask, you guys at CocaCola really didn’t really think this through, did you?

Here is a screenshot, lest anyone thinks this is being made up. 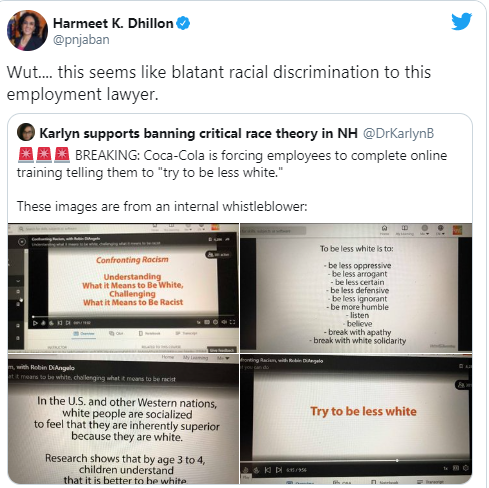 To be fair, in my experience, white people, commensurate with their wealth, tend to be giant jerks. I have seen this time and again. I don’t talk race or politics much, but I did delve into this a little in this article.

When the doodoo hit the fan, a Coca-Cola spokesperson told Newsweek

“Our Better Together global learning curriculum is part of a learning plan to help build an inclusive workplace,” the spokesperson said in a statement. “It is comprised of a number of short vignettes, each a few minutes long. The training includes access to LinkedIn Learning on a variety of topics, including on diversity, equity and inclusion.”

First, what is a faux pas? One example is “an embarrassing or tactless act or remark in a social situation.” Or as Merriam-Webster says:

Basically it’s huge error in judgement. And they have a history of them.

What other errors has Coke made? Well, cocaine in the original product is possibly one, yet, it was a different time. Tony Montana would have been a huge fan!
New Coke is another example.

Both of these are the result of either addled minds, or brilliant marketing.

This, the Be Less White thing, (which was supposedly leaked), has made a lot of people pretty angry. I have seen people denouncing it, and Coke, on so many platforms, from videos of people throwing away coke, to calling for people to sell their stock, to folks saying nah, I’ll opt for Pepsi and more. As a matter of fact, the stock is falling today, see the graph below. 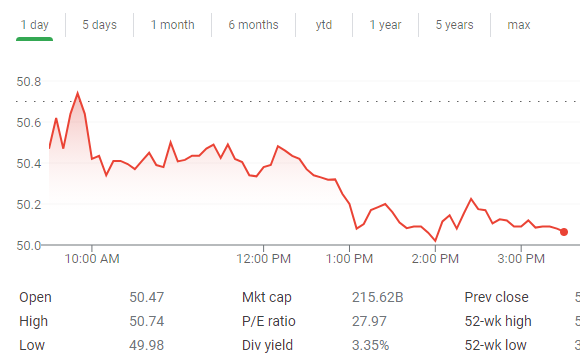 Yet, if you look at the larger picture, you will see something extraordinary. Coke will recover. You see, they have always has stock fluctuations, ups and downs. The graphic below shows Coca-Cola’s (KO on the stock exchange) over the past 5 years. The time to worry was March 20, 2020, when it dropped a whole bunch, $22 a share! Coke’s stock has been fighting back ever since. 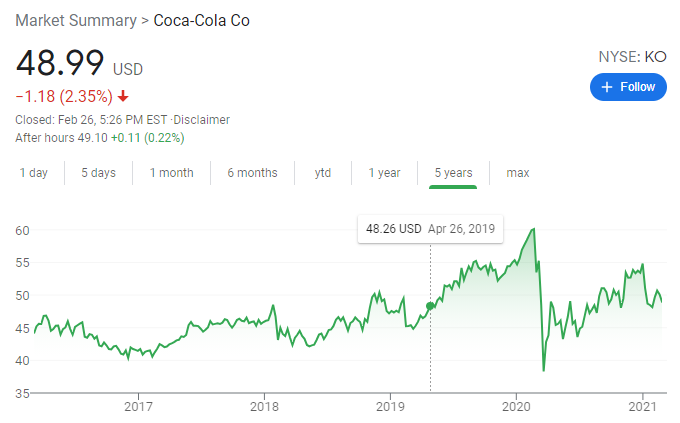 Coke Will Go On

So, you can look at this shameful “Be Less White” goof up as a bad thing, or you can look upon it as an big opportunity. Buy low, sell high, as one does. Coca-Cola is chockablock full of smart employees, they will come out of this alright, and their stock price will rise. Aside from whomever came up with the Be Less White thing, they are pretty savvy. And the brightest spot? You can virtually bet the farm there will be a SNL skit mocking this.

As for me, our Coca-Cola is gone, and we will be buying other products instead, until such time as Coke apologizes :p