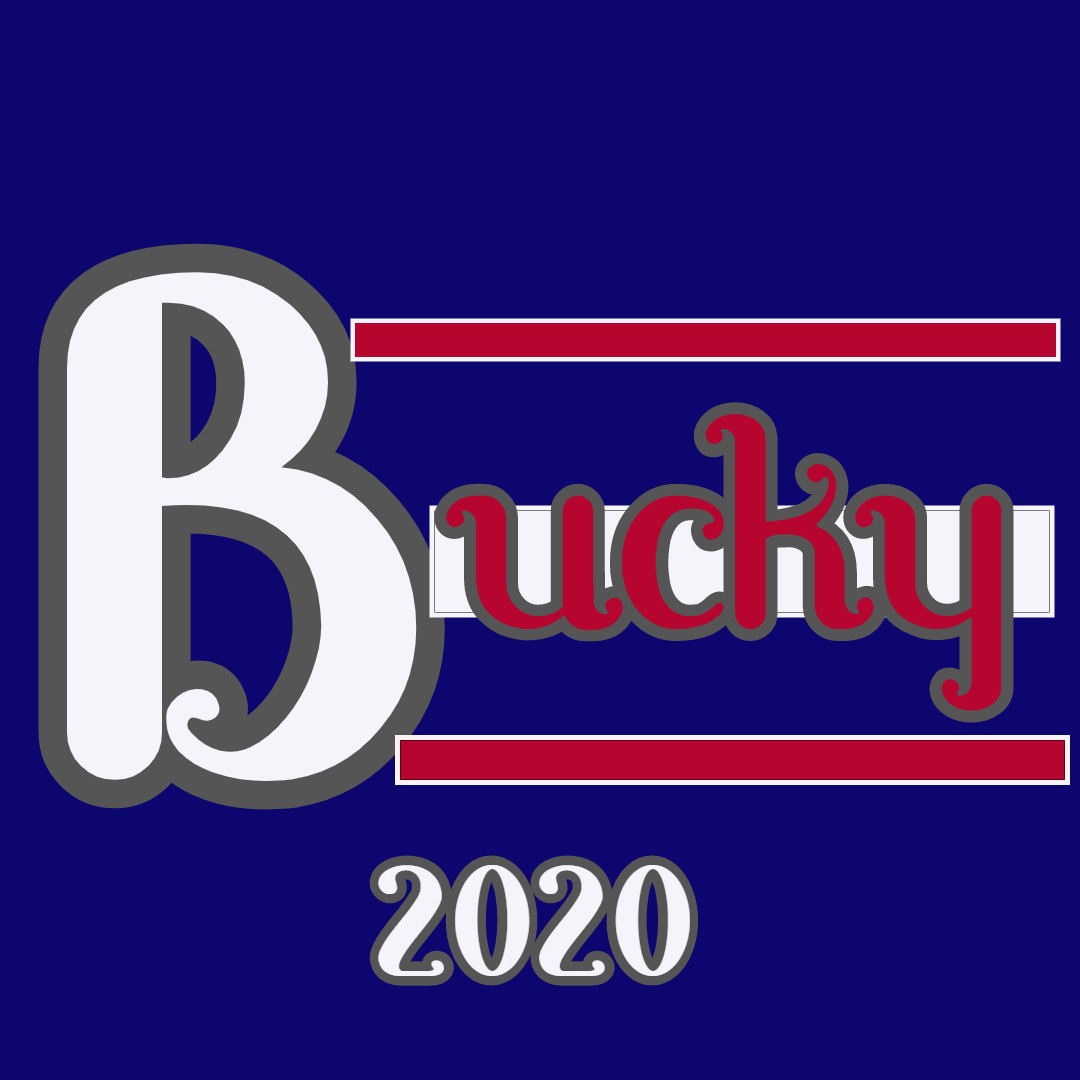 I'm Bucky T. Builder. I am the successful Mayor of Ghipaland. Ghipaland is a SimCity Buildit city, and I'm running in for president the 2020 presidential election. Being that it's an exclusive place to run a city, you may have never heard of it. Or me. So, I'm asking for your help. I have a lot to say about my 2020 run, and since I don't have a press liaison or anything, I'm forced to bring my message directly to the fine people of the United States of America themselves. That's you. Also, since I don't have anyone feeding me questions, now and again I'll phrase things sort of in a 3rd party way. You know, sorta of like the headline above, "Bucky Decides..."

Why would Bucky run for president?

The 2020 presidential election is nearly as big a mess as the 2016 election was. Lately, no matter which party's candidate you're voting for you basically get the movie Idiocracy. But that isn't the anything new. It's been decades since we had a real President. FDR, good, Truman, joke. Ike, good, JFK, too short in office to tell, but likely would have gone down as great. LBJ, joke, Nixon, could have been great, but joke, Ford, joke. Carter, it just goes on and on likewise. So why not run? If the whole thing is going to be a mockery, let's go whole hog, I say!

What is Bucky's party affiliation?

I am what you might call an independent. However, I am launching my own party as I begin my run for the 2020 Presidential election. It is called the Eggnog Party.

What? You said it, I know. Who likes eggnog, right? Well, you either like eggnog or you're wrong. By the way, 49% f people like eggnog, with alcohol or not. And according to Correlated.org:

In general, 49 percent of people like eggnog. But among those who have used the word "obsequious" in conversation, 63 percent like eggnog.

Based on a survey of 205 people who have used the word "obsequious" in conversation and 503 people in general. 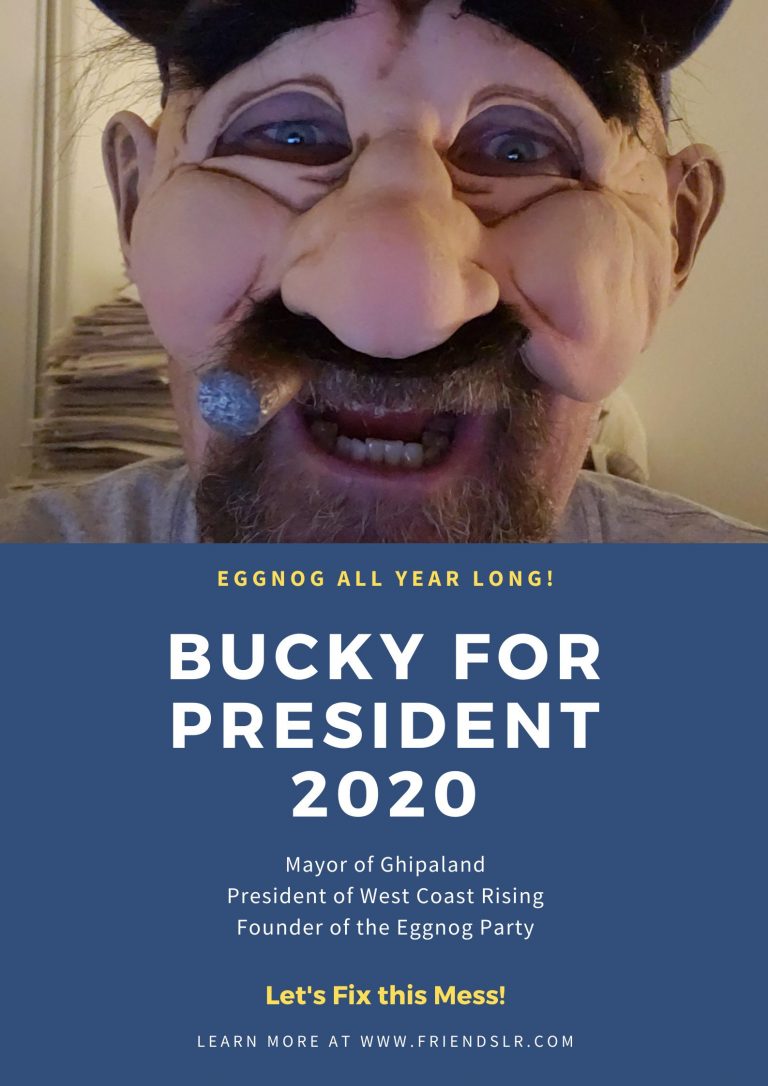 Beating Biden in the 2020 Presidential Election

You almost feel bad for Joe, dementia, the sniffing and unwanted touching by this man.Why are the democrats running this guy? Well, it is a fact that once you run in the main race as the official candidate, and lose, you're damaged goods. They know they aren't going to beat Trump.

The first debate, if it happens, will show that. "Goats are like mushrooms..." Biden is more a liability than asset at this time. Heck, The Gaff Machine was never a solid candidate at any time. Remember his plagiarizing speech years ago? The real power, should Biden win, will be Kamala, of course. So if you're going to waste a vote, right here is ol' Bucky.

Ain't gonna happen. Beating any incumbent is hard, especially a wily incumbent who has no intention of losing. Bush the First lost to Billy Boy, I think, on purpose. To paraphrase: "I want to be thought of as a new day Harry Truman." Well, the largest block of likely voters knew nothing about Truman, only that he approved the only use of nukes in war ever. Truman was a dick. Sorry for the harsh language, but he was.

I have seen a ton of vitriol slung against Trump, most of it unfair, some earned. He's no dummy. He beat what a lot of folks say was a rigged election, where the presumptive president elect was (s)elected long before the race began. And the left exploded into one of the longest hissy-fits I have ever witnessed in my whole entire life. It continues today, and will for the next 4 years. What is Trumps crime? Winning. They call him the "Cheeto in Chief" and other unflattering names. Mind you, these are the same exact folks who decry name calling. Hypocritical Identity Politics Scammers That Erase Rational Sense. H.I.P.S.T.E.R.S. These same folks say "Don't go out in the sun, you'll get skin cancer" then turn around and blast the president for using spray tan, to keep from going out into the sun.
So he's not a polished politician. That was the whole point. 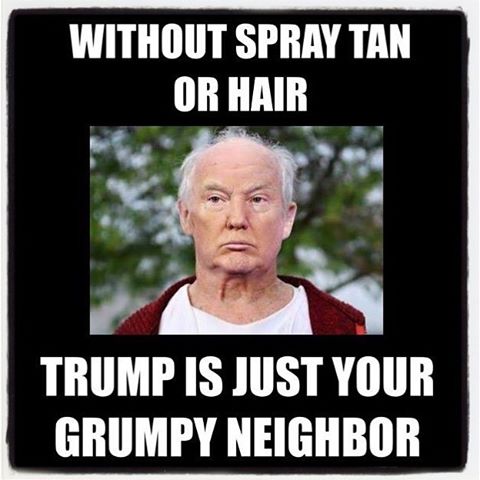 Oh, and a quick note: If Trump shaves his head and grows a goatee, I'll not only vote for him, I'll campaign for him too!

How To Win the 2020 Presidential Election

Where is my advantage? Well, lacking in the oval office is Dignity. Of course I have none either, sooo....
I think it all comes down to my, and the Eggnog Party's, platform. What people want to know is:

People want to rest assured at night that their leader/s are looking out for them. That is what the United States of America is, a representative republic. We are not a direct democracy. Google it.
Our representation ought to be giving a hoot about us.

There are serious, as well as what some may say are silly, items on the Eggnog Party Platform.

Addressing the Items in the 2020 presidential election

Seriously, why is Eggnog only in stores from thanksgiving to New Years? There is no dinged danged reason for this madness!

Why in tarnations do we have a sliding tax? Are not all men and women created equal? 15%, across the board, very limited write-offs. Then we abolish the IRS. There is no good reason why the tax code is so stupid complicated. Well, one, to extract as much as they can of your money.

Cut it out with the Covid masks already. We'e been good compliant monkeys til now. No more.

If you work full time, you will have the option to put your 40 hours a week in over 4 days. However, this is with no overtime. Why pay someone half again for the same amount of work? Say "Hello 3 Day Weekend" EVERY week!

Ah,Starbucks. This is a populist concession. Even where I live, where everyone is poor, folks will queue up into 30 minute lines in their cars to pay $5 for a 15¢ coffee. None to bright, these. However, since people are willing to do this, ought not the richer folks pay that tab? I think so. And those who want more than their 2 paid for cups? 1/2 price.

National Healthcare. Can we all just admit now that this was a mistake and a failure, overall? We are not Sweden or Denmark. By the way, when did either one of them lead the world? Or win a war? Anyone? It is a product, and if you want said production, you pay for it.

Anyone who doesn't see a major confrontation with China in the future is myopic as can be. They are jockeying for financial world domination, and sure as the sun rises, they will one day want full on domination. We must be strong to keep our place at the table, to keep the peace, lest we become a shadow of our former selves. 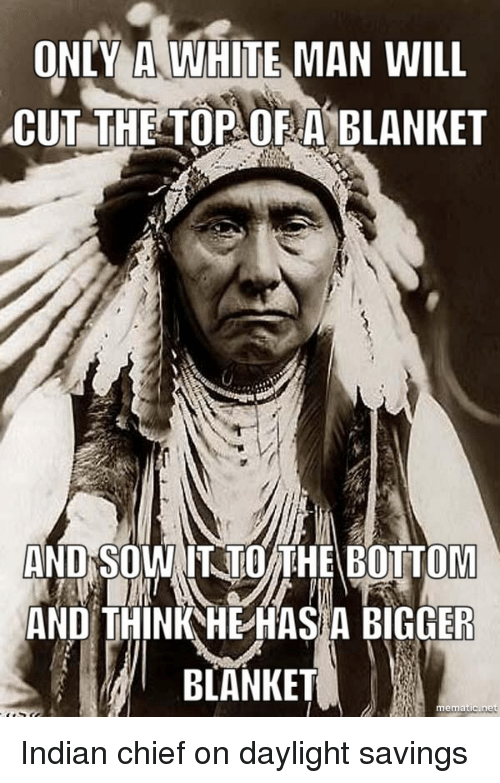 I'm a third party candidate like the late Ross Perot 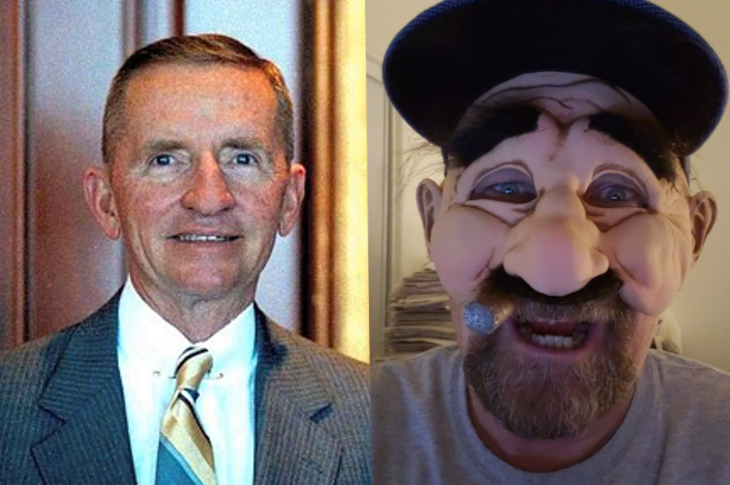 I'm also a little like Mr. Trump: I can appreciate a big ol' building. He pays for them, and I build them.

I'm old enough. I'm the mayor of Ghipaland. That is a city in SimCity Build It. A successful mayor, I might add. My city is sort of like a little communist place. I am the mayor for life, and I have a 100% approval rating. It's a little capitalist too. I have about 1.2 million Simoleans on hand due to taxes. I cannot reduce taxes unless I make my citizen unhappy. They gladly shell out a 20% tax rate to live in my city. Ghipaland is a little imperialistic as well, in that I have regions, which really are nothing more than colonies, that produce stuff that I sell or make use of.
Right now I govern 3,773.361 citizens living there.That's lke 1% of the country's population
Does having my virtual city make we qualified no run the country? Heck no. but it would be fun.

Here are a couple other articles I wrote recently. I like to help people:

Vice President: Jimmy Fallon. I just think that would be all kinds of fun. Additionally, I have included a short list for other positions.

Secretary of Agriculture: Snoop Dogg. There is no one more qualifies to make sure we have all the makings for munchies.

Treasury Secretary: Kris Kardashian Jenner. She made a financial empire out of nothing. Literally.

You see, I'm not some rich guy looking for glory. I have $1.98 in my pocket and that's it. I have a computer, typing skills, sort of, and a love of life, God, and country. And by golly, I intend to leave this world one day, and until then, I want to make a difference.

In this whole entry, I'm having more fun that ought to be legal. At the same time, I mean every word. Oh, and Jimmy, call me...