Pizza for Breakfast: How to Make It - Quickly and Easily!

Pizza is one of the tastiest foods of all time, in my opinion, and while pizza for breakfast may seem a stretch, many people would retort: why not? As matters of fact, some makers of frozen pizza have taken on making breakfast pizzas as well, because, you know, pizza!
If you have ever taken a cold slice of love, erm, I mean pizza, out of the fridge first thing in the morning and savored the experience, you know, first hand, what nirvana is. Not the band, that would be weird.

Here I will walk you through making a pizza for breakfast, quick, easy, cheap, and just wait until you taste it!! 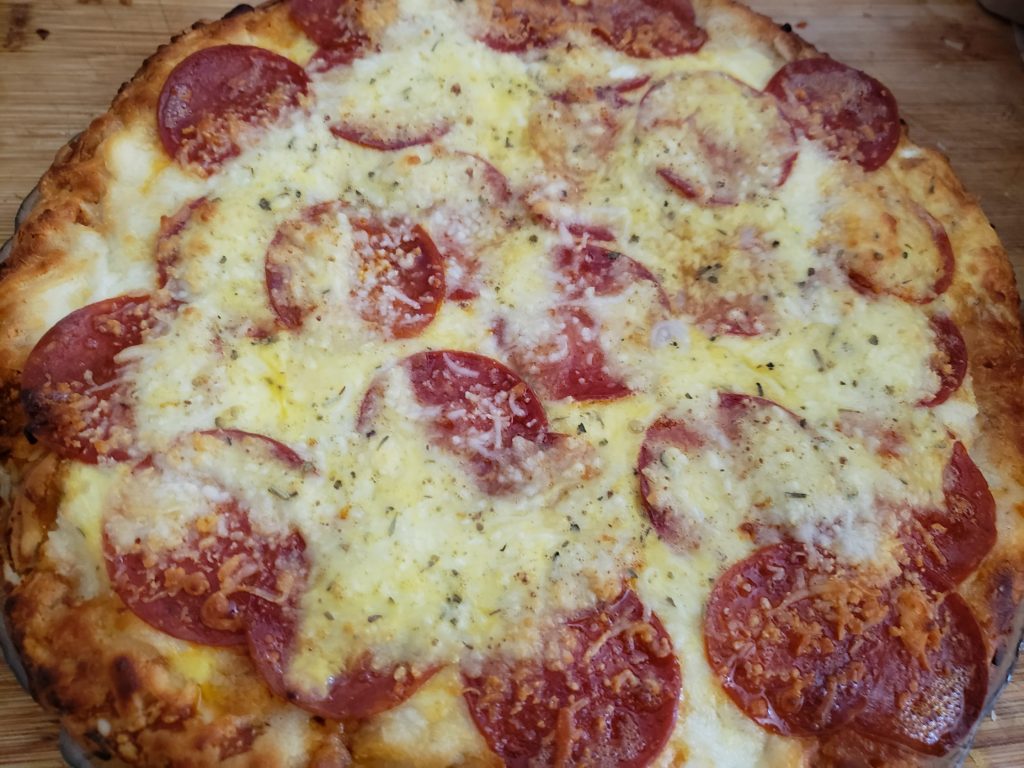 I mean, you ought to worry if that morning grub is going to nourish and sustain you, right? In a word, yes, pizza is nutritious. As a matter of fact, a pizza place called Pizza Planet in Texas (where else?) wrote an article that explains it quite well. Click here for their article.  I like how these folks think!

Furthermore, you can click here to see Domino's Pizza nutrition information. However, those of you who know me, also know that I am not a Dominos fan. Their system? Yes. But seriously, it's barely pizza. Yet, they had the guts to post their nutrition online, and they service a whole lot of people, sooo... maybe more on that topic later. Right now we're talking about how to make...

Pizza for Breakfast - The Fixin's

Let's make it simple here folks. I am a pizza expert -some might even say a "pizza guru" - but even I don't have time to make it all from scratch most of the time. Rarely, as a matter of fact. So let's make do with off the shelf stuff. I'll tell you how this all came to be near the end of the article.

You need the pizza if you're making breakfast pizza. Start with any ol' frozen pizza. I'm partial to DiGiorno, because it's good for a frozen pizza. Since this was a split second decision to try making pizza for breakfast, I didn't want to burn $6 should this flop, so I opted for a Red Baron Pepperoni Pizza. I also prefer Tombstone to Red Baron, and both are cheap, but the Red Baron Pizza had more heft. 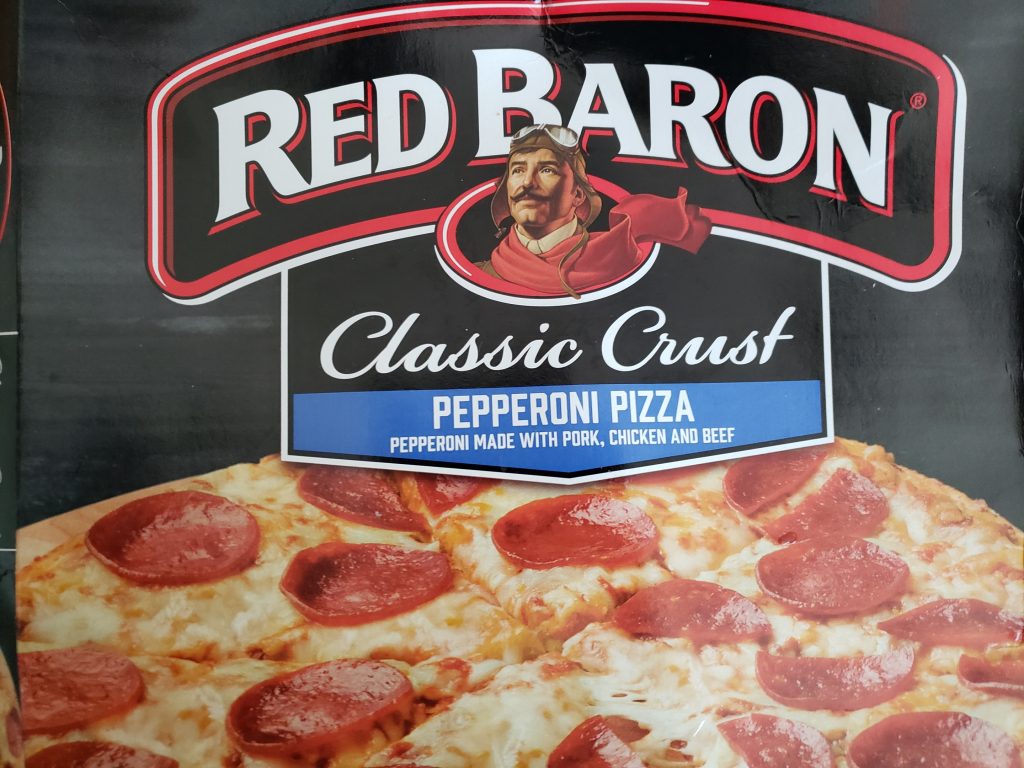 Ironically, Red Baron makes a breakfast pizza too. See it here. To this day I have no idea what a deadly WWI ace German pilot has to do with pizza, but whatever.
Why pepperoni? I figured the pepperoni would crisp up, emulating bacon, in a way.

Most online recipes call for breaking an egg in the middle of the pizza and cooking the pizza normal. the problem is, who gets the yoke? I'm not yoking around when I say that I want it all, white and yoke, in every bite! So I decided I wanted to sort of have the eggs scrambled, sans the scrambling part. 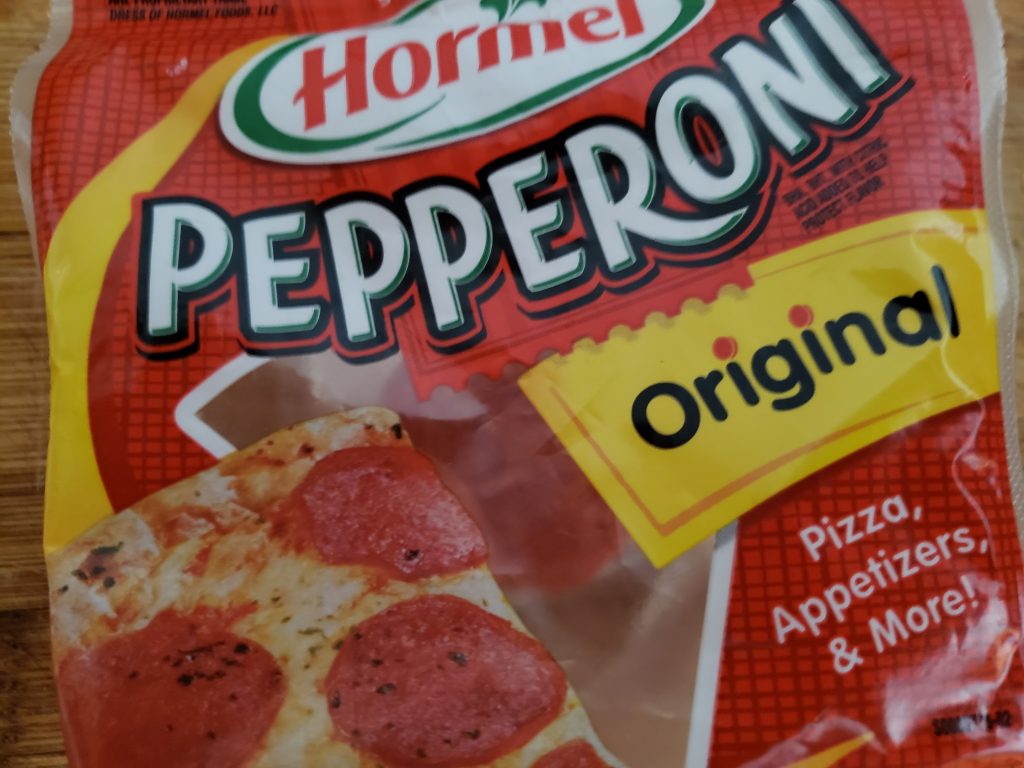 I went with pre-shredded part skim mozzarella. A real pizza has mozzarella only, and I always keep some shredded mozzarella on hand for our weekly pizza, a DiGiorno. I ALWAYS add a few ounces of additional cheese. If there's one thing all frozen pizzas have in common, it's a lack of cheese. Make that two things, toppings, too. Bring more pepperoni to the game too. 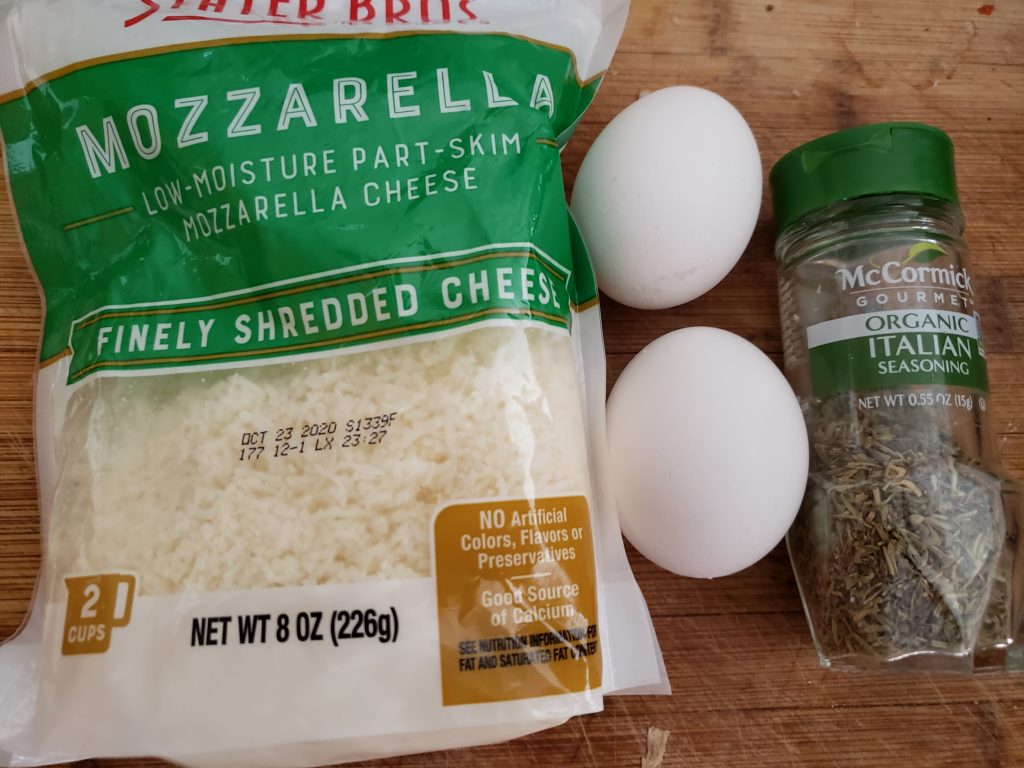 Yep, I'm just flat out being lazy here, but, again, this is "quick and easy" pizza for breakfast. I have basil growing in my garden, am re-planting oregano, but no, speed is key.

Ok, this may seem a no-brainer, but there are a lot of folks out there who have never whisked an egg in their life, be it making scrambled eggs or whatever. In this, we are not making actual scrambled eggs. We are not precooking anything, not adding milk to the eggs, so slow down there pard. 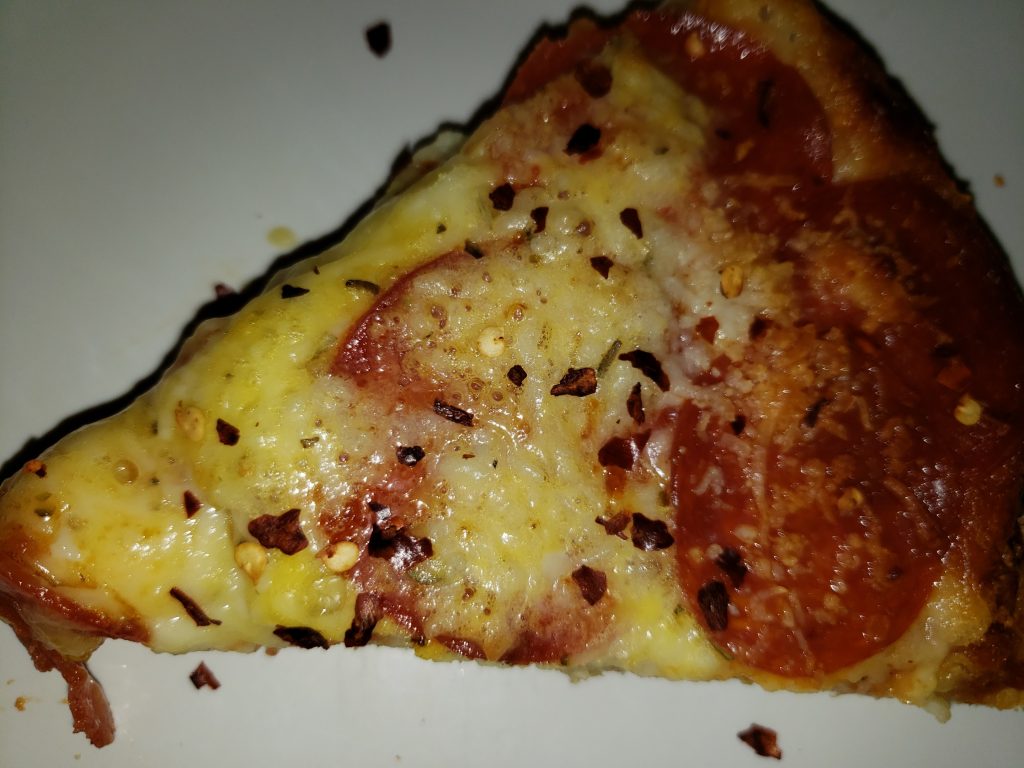 This is totally optional. Adding these two beautiful items will lend added, and needed, zip to the pizza. Serious zip. Zippety zip zip! And those of you who cry when you see a packet of Taco Bell mild hot sauce, we can't be friends. That ain't even hot, it's just sauce. You're going to need to go and stand over there in the corner now.
See, if you can't "Eat the Heat", you are at risk of losing your man cards. And ladies that includes you too, most women have more man cards than many men have.
As far as seasonings, the two things I wish I would have added to the eggs was salt, and pepper. I thought the pepperoni would take care of both. Wrong.

Making The Pizza for Breakfast

Read the pizza instructions. You are going to cook it exactly as the box says to. I preheated to 400, as the box said, and cooked for 18 minutes. The box said 18 to 22 minutes. Since my oven is fairly precise, I always opt for the lower.

While preheating open the box, discard the plastic, as the box says. Amazing that they have to tell you to do that, right? People.

Add enough pepperoni to the stuff that comes with the pizza to where you can barely see the cheese. Add about 2 ounces of shredded mozzarella on top of that.

While it gets hotter

While the oven heats break two eggs into the bowl. Add about 2 ounces of shredded mozzarella, and maybe 1/4 teaspoon of Italian seasoning to the eggs. Shake in a little salt and pepper too.

Whisk those eggs like you're an annoyed cartoon Tasmanian devil. Get at all mixed really well.

The oven is ready

As soon as the pizza reaches the cooking temperature, whisk the eggs one last time and pour the contents of the bowl onto the pizza, covering it as evenly as you can. Now pop that pizza into the oven and start your timer. 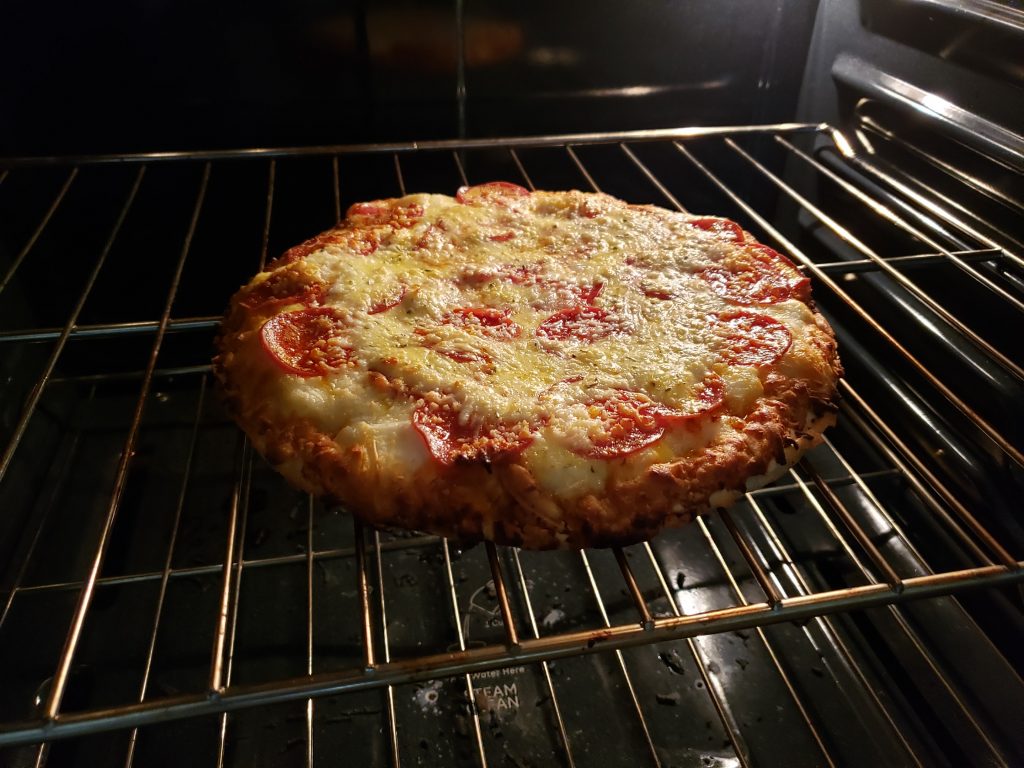 When the time is up

Pull that bad boy out and enjoy. I prefer to cook my jalapenos, but in this case I wanted to have them fresh and crisp atop the pizza. I thought that the pizza may get a little mushy with the added moisture, and it did a little, but the jalapenos added heat and snap. And zip, did I mention zip? 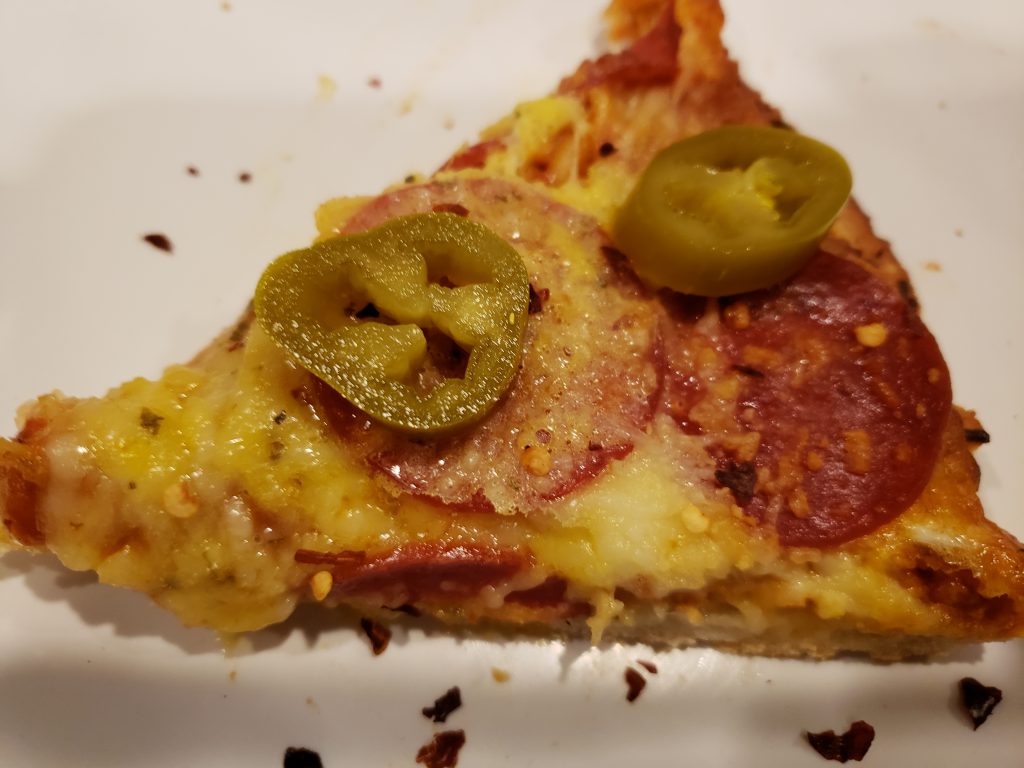 The eggs will be a little like a cross between scrambled and a soufflé in texture.

Having spent 15 years working for pizza chains, I have always thought that if you are paying rent on a space to sell your wares, you ought to make the most of it. If you're closed 13 hours of the day, as most pizza joints are, then: say your rent is $4000 a month. There are 700 hours in a month. You're open, making money for 330 hours of that month, yet there's another 370 hours of nothing. You're paying just over $12 an hour in rent 24/7. Open for breakfast, say, 7AM, you are now open and potentially have 15 hours a day to earn income. Your rent per open hour is now just under $9 an hour. Yes, you have other overhead, increased utilities and labor, but that can be put to good use as far as your daily prep. All you need is a product that is cost effective, inexpensive, delicious, and fast. The only real hurdles? Making people think about having pizza for breakfast, and branding. If your sign says pizza, just do pizza right. If is says burgers, do burgers right. Way too many restaurants try to do too much, and do it poorly. In these days the risks are greater than ever. Stay focused!

There was this kid that used to live with us, from childhood on up. At one point he, we'll call him son, like his sister, worked for Round Table Pizza for a time, and when we moved out here he went to work for Dominos. I know, right?

He and I were talking one day about breakfast pizza. He went on to say that when he worked the opening shift at Domino's, they would often start the day with a breakfast pizza, of sorts.

"It's easy; you just break an egg on top of the pizza and throw the pizza in the oven. Boom, breakfast pizza."

It is almost that easy.